A wonderful review for Michael Stephen Daigle’s Frank Nagler Mystery series and his third installment in the series, The Weight of Living. 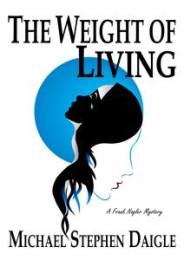 I greatly enjoyed the first Frank Nagler story, “Swamps of Jersey.” The writing is superb, settings so vividly portrayed as to be nearly palpable. The plot is engaging and the main character captivating. I was thrilled to learn that a second Frank Nagler story was in the works and couldn’t wait to read it. In “A Game Called Dead,” Frank Nagler is still intriguing, a man whose sense of morality drives him to soldier on despite his deep personal pain. I may have actually hit on one of the clues well before the book ended which didn’t at all detract from the reading pleasure. The story isn’t so much a “whodunit” as a “why they dun it,” and the wide-ranging effects of the crime. I was rooting for Nagler to solve it because this…